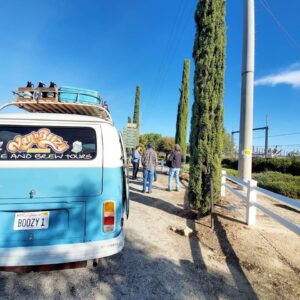 On the very first day of the year, bright and early, we were featured by KTLA5 for the Roseparade!

We can't believe it's already February! Time flies when your having fun.

We filmed it maybe a month before it actually aired, so the whole time leading up to it we were nervous/excited to see how it turned out!

When we first met with the whole team in a parking lot, we had decided Sarah was going to do the talking and they would film in Boozy1 (Blue Bus). Then everything got switched around in the last minute, and they wanted to film in Boozy3 because of the sunroof! So Rich was driving that bus for the day, and he got to do the interview!

It was awesome getting to talk to Mark Steines and Kathleen Bade (the hosts of the 2020 KTLA5 Roseparade) and drive them around in the Boozy Buses! They were both amazing at what they do.

The morning of the Rose Parade, we were excited to see that it turned out so good! I included the video down below. It's a short and sweet little clip of what we do out here in Temecula, California! 🙂